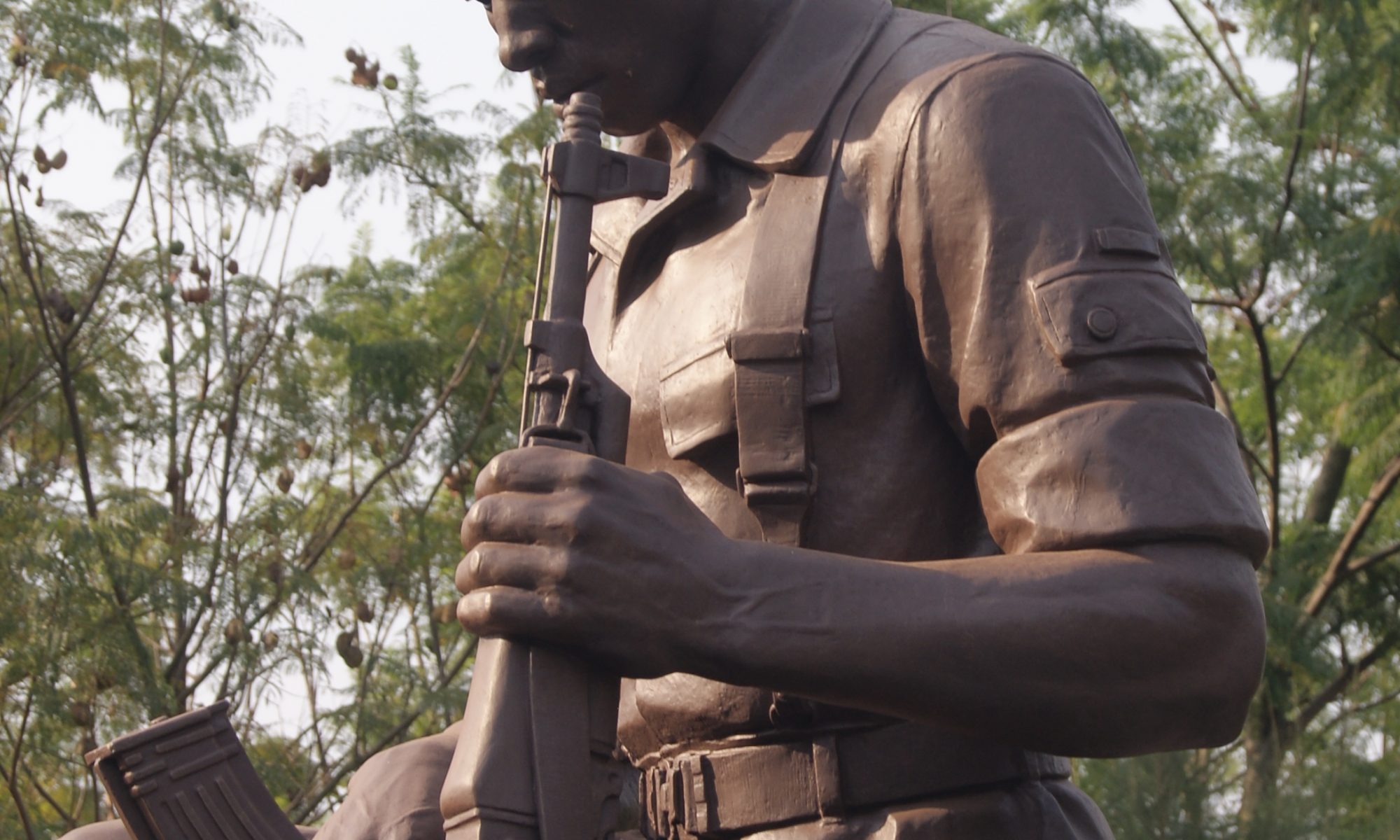 There is a funny thing about flying into (and out of) Kigali, Rwanda with Ethiopian Airlines. The flights are all in the middle of the night, which gives a traveler an extra day to enjoy their time in Kigali. Three days earlier my flight into Kigali from Addis Ababa arrived at 12:45 AM (after a 10:45 PM departure from Ethiopia), and I was about to fly out of the country at 1:45 AM on Saturday morning, which gave me all of Friday to explore Kigali.

But although this was the sort of excursion I thrived on when I was a young college student, sleeping on trains and busses only to find myself reenergized in the morning, I also recognized that I wasn’t a young man anymore. This would be a long flight, and if the flight into Rwanda told me anything it was to expect a packed airplane.

I elected to hire Alex for one more day. I liked his energy and he proved to be an engaging host. But I also knew I needed to sleep in, and asked him to pick me up at 10AM from my hotel. As was often the case in Rwanda, he was early.

Our first stop would be the Rwandan Parliament, a functioning legislative building that still carried the scars of the Civil War and that housed its own genocide museum: The Campaign Against Genocide Museum. Arriving at Parliament we went through security where we left our IDs and then spent a full twenty minutes trying to find the entrance to the museum. The building was still trying to find that perfect balance between tourist site and functioning government building, but once we found the museum we were ready to start the tour…with one caveat. No photos inside. I wasn’t sure why since the displays were not particularly noteworthy or historic (nothing was original, most were just photos and text on a museum display along with some mannequins dressed up like soldiers) but I complied.

I couldn’t help but note the political nature of the display. The Rwandan Patriotic Front was the ruling party, but this museum made no attempt to hide its political bent in promoting the RPF party line. With that being said, the Green Party didn’t really have a role in stopping the genocide so I guess the museum could be forgiven to a degree. Still, I tried to picture the U.S. Capitol turned into a Civil War Museum with numerous displays talking about how awesome the Republican Party was and I realized that dog wouldn’t hunt out here. I realized the historic separation that we have in the USA between government and political party just wasn’t present in Rwanda. It just wasn’t. Everywhere were reminders that the RPF and Rwanda were, for all intents and purposes, interconnected in a way that Americans would be uncomfortable with. In Rwanda the Party and the State were joined at the hip.

I started to notice that the museum was just as much a celebration of the RPF as it was a memorial to the victims of genocide. And any question I had about the political nature of the museum was answered towards the end of the tour when I saw the display honoring those who stood up in the face of unimaginable horror and fought against the perpetrators. There was a display honoring an old Hutu woman who many locals regarded as a “witch.” She hid Tutsis on her property and scared away the genocidaires by claiming that they would be “cursed” if they searched her land. There was a display of some locals who fought against the Interahamwe armed with little more than the tools from their farms. There was a display of foreigners who helped protect innocent Tutsis from slaughter.

And yet nothing on the most famous hero to emerge from the Rwandan Genocide: Paul Rusesabagina. Rusesabagina was perhaps best known to Westerners due in large part to the film Hotel Rwanda, which was based on his life. Naturally Hollywood took some liberties, and in the years that followed there have been some of the survivors who claim that Rusesabagina was actually sort of a dirtbag during the siege, charging the refugees for food and soft drinks and even giving the room numbers of guest to the Interahamwe. But for others the story of his heroism and courage were an inspiration. Whatever the case, it seems clear that he risked his life to save the lives of 1,268 innocent Tutsis, giving them shelter at the Hotel Des Mile Collines in Kigali. It was no small act: all across Rwanda so called “moderate Hutus” were being massacred by the Interahamwe. The simple act of giving shelter to the Tutsis, and doing so in such an open way, was an act of unmistakable courage…even if he was price gouging the Diet Cokes.

And yet nowhere in Kigali could you find even a mention of Rusesabagina. Not even a display that questioned what role he played. In fact, nothing about the man from Hotel Rwanda.

No explanation was given as to why but the reason seemed obvious: in the years following the genocide he emerged as a vocal critic of President Paul Kagame. With the falling out between Kagame and Rusesabagina, Rusesabagina would soon emerge as a Rwandan Nikolai Yezhov: a ghost, erased from the nation’s history.

Once outside I was able to start taking pictures again. The parliament building was the scene of some of the fiercest fighting in 1994, a small island of RPF controlled territory surrounded by hostile enemy forces hell bent on their annihilation. It made me think of Sarajevo during the Bosnian Civil War, a Muslim city surrounded by hostile Serb forces determined to eject them from the city by any means necessary. The Parliament in Kigali was in just as desperate a place in 1994. They were they surrounded by the Interahamwe, who were not only determined to remove them but to exterminate them. And on top of that they also had to deal with the refugees who were fleeing the carnage. For those who could reach the Parliament, it was an island of safety in a sea of horror. But for the 600 RPF soldiers fighting for their lives, it couldn’t have been easy, fighting for their lives while also having to deal with an untenable refugee crisis. The first display I was able to see outside was a somewhat unusual display featuring mannequins dressed like RPF soldiers treating injured civilians in a medical bay. 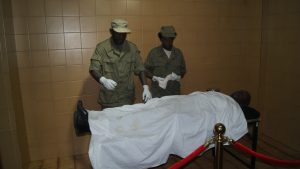 From there we were taken to a statute honoring the soldiers who perished during the rescue operations. 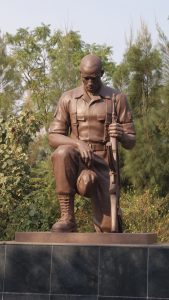 We then went upstairs to the roof, where we saw an incredible view of the city as well as a statute of two soldiers operating an anti-aircraft gun We were told was an exact replica of the gun used to fight off the much larger Interahamwe force looking to seize the building. As is often the case with places of pure horror and carnage, the rooftop was now peaceful and quiet. The faint sounds of the city below seemed to tell a story of a city that was now at peace and devoid of the chaos and confusion that you found in most cities in Africa. 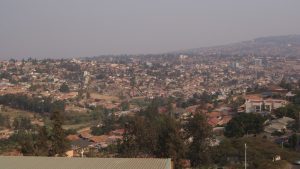 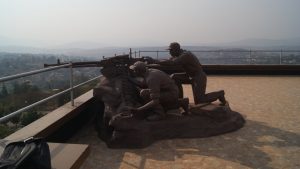 But once we were back on the ground floor there was no question that it had not always been the case with the building. The side of the building still wore the scars of the shelling from the war, an unmistakable reminder that Rwanda was not going to forget what had happened in 1994. The final statute was one of a “woman who has just been killed” and soldiers carrying her rescued child. 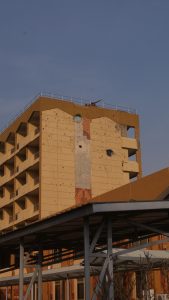 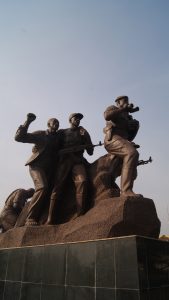 By now it was already early afternoon and I realized my plan of visiting the Ntarama Genocide Memorial Centre was in danger. Alex was unsure if we could make it before they closed but we would try. As we drove down the highway outside of Kigali I noticed Alex flashing his headlights into incoming traffic, a warning that they were approaching a speed trap. It was something I had to smile about as he explained why he was doing it. In America it was one of the oldest tricks in the book, but in Africa is was a rare thing. For one thing that the police actually enforced speed limits in a way entirely unconnected to collecting bribes. We arrived at Ntarama at just past five and walked in. It was visibly closed by I wandered around for a few minutes taking pictures before we were approached by a security guard who told us they were closed and we had to leave. Alex asked if we could stay just a little longer but the security guard advised that the tour guide had already left. 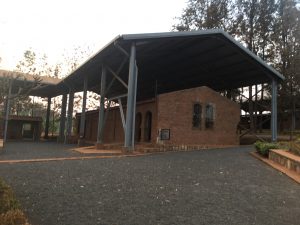 “Can we see if he would be our guide?” I asked Alex. (Translation: Can a little baksheesh solve this problem?)

Alex laughed uncomfortably. (Translation: no it can’t and I’m not going to ask.) 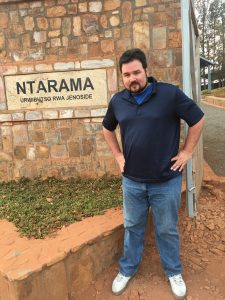 By now the sun was going down and Alex had one more stop for me, the central marketplace. In Africa, as in much of the world, the marketplace is a unique place for the obvious tourist. The smells, the sounds, the high pressure salesmen…they all were common in the market. And after Kigali challenged every preconceived notion I had about Africa I was curious if the marketplace would also be different.

The vendors saw a mark as soon as I walked in and the classic third world marketplace catch phrase soon filled my ear: “hello my friend!” 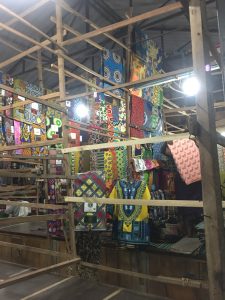 I had a few items I was looking for, in particular an elephant for a friend of mine. But I was also curious about the clothing situation. Rwanda was planning a total ban on used clothes from the West, seeing it as a threat to the local textile industry. I was curious as to how feasible this ban would be: after all, everywhere in Africa I found used Western clothes that had been donated to a local Goodwill…only to be shipped en masse to Africa where it was distributed to the poor. I could see how hard it would be to fight back against such a market if you were a local manufacturer. How do you compete in a market where your competitor paid nothing (or close to nothing) for their product? How could you sell your domestically produced clothes when the guy next to you was selling a Lady Gaga 2009 World Tour t-shirt for pennies?

The marketplace seemed to have no shortage of local clothing, as I saw dozens of vendors with old sewing machines making clothing. I saw the same thing in Ghana and was fascinated by the frequent sight of women using old 1940s Singer sewing machines to make clothing. Rwanda was no different. 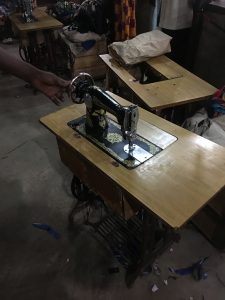 The imported clothing market was already on life support in Rwanda…and soon there would be nowhere in the country where a man or woman could purchase a “Deez Nuts” t-shirt. 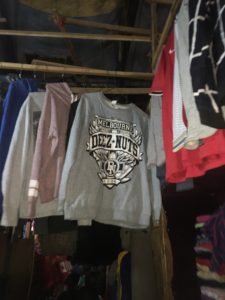 I spent the last of my Rwandan money and Alex took me back to my hotel to pick up my bags. It was time to go to the airport and as much as I hated to leave, my time in Rwanda was up. I knew I would be back; there were still so many sites I hadn’t seen. Maybe I could even take a trip down to Burundi next time.  But until then, I would take with me the memories of my three days in Rwanda and smile at the little country in Africa that challenged everything I though I knew about Africa.