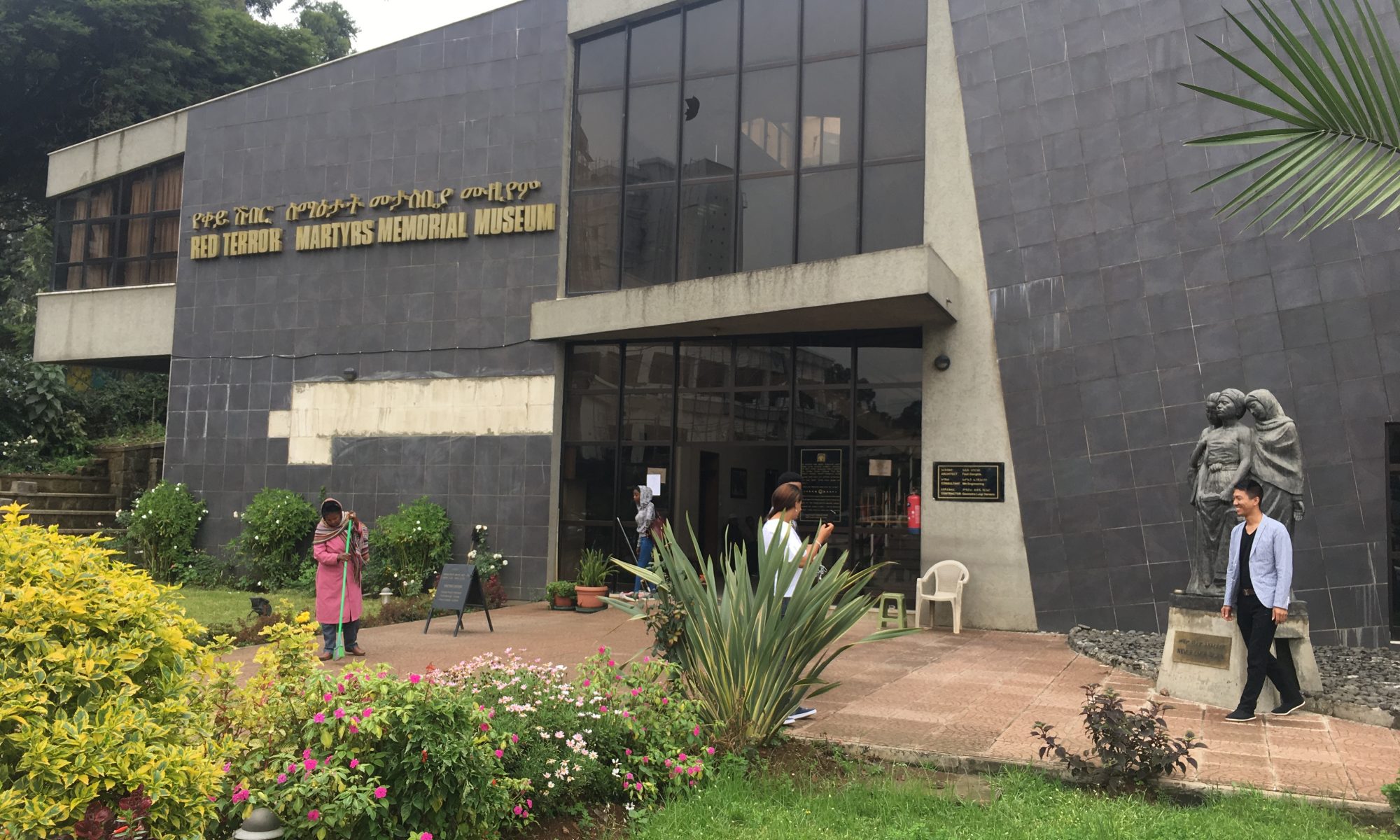 As I stepped into the main terminal at Bole International Airport in Addis Ababa I couldn’t help but ask myself why Togo had to make things so damn difficult. I had gone to Accra, Ghana to cover a boxing show and my original plan was to spend a couple of days traveling overland to Togo, Benin and then Nigeria. It would have been cheap and from what I could tell it would have been one heck of an adventure. In particular I was interested in the Akodessewa Fetish Market just outside of Lome, which was apparently the largest voodoo fetish market in the world. Reading about it on Atlas Obscura made it sound like the sort of place I needed to check out, at least once in my life. It was something right out of an Indiana Jones movie and I was gun-ho about having my own Dr. Jones adventure (at least one with the cool locations.  Truth be told I didn’t want to deal with melting Nazi faces and Indian death cults leaders trying to rip out my heart).

But then came the visa process, and I suddenly understood why Robert Kaplan was so critical of West Africa in his book “The Coming Anarchy.” Togo was 128 miles from Accra, and Lome was just across the border. From Lome I would just be 48 miles to the first town in Benin: Grand Popo. All in all I could catch a TroTro in Accra to the border for about $5 and then splurge for a cab in Lome (which according to Wikitravel would set me back a cool $2.16 for a ride to Grand Popo). I was stoked: I was about to cover two countries in three days…all for under $10. From Grand Popo I assumed it wouldn’t be more than $10 to make the 123-mile journey to Lagos, Nigeria.

But then came my first hurdle: I didn’t have a multiple entry visa for Ghana and I couldn’t get a straight answer as to if they were available at the border between Ghana and Togo. I was facing the prospect of having to go to the Ghanaian embassy and getting another visa, which from what I could tell might run me upwards of $100 since I would need it the following day. Then I would need to get a visa for Togo, which would run me $140 for a single entry visa. Although the website for the embassy of Togo made reference to multiple entry visas, I couldn’t find a price for that, which led me to assume that the multiple entry visas I would need for Togo could run me as much as $280. Finally there was Benin, and their $140 visa fee for a single entry visa…which meant my trip to Nigeria could end up costing me $280 for two separate single-entry visas in Benin as well. Finally there was Nigeria’s $180 visa fee, which pretty much killed the planned overland trip through West Africa. My $20 bus and cab ride from Accra to Lagos was now looking to run me as much as $840, and as I didn’t have time to get the visas in the States I was unsure of how successful I would be getting the necessary visas in Accra. But it did lead me to an interesting discovery while researching if I could fly from Lagos to Accra without dealing with reentry in Togo or Benin: Ethiopian Airlines flew from Accra to Kigali. Rwanda and that included a layover in Addis Ababa.

Rwanda was high on my list of countries I had to visit, and although Ethiopia was not exactly a nation on my radar, realizing I could visit the country immediately had me hooked. And reading about Ethiopia online I saw three of the most welcome words to any traveler in Africa: visa on arrival. It wouldn’t be outrageously expensive ($50, which was a bit steep but certainly a lot more reasonable than the $180 that Nigeria required) and I could get it at the airport when I landed. I switched my search to a multiple-city search on Kayak and was pleased to see that the price didn’t jump up much. I would be looking at $602 for the roundtrip ticket from Accra to Addis Ababa with an overnight in Addis before I headed out to Kigali. The flight arrived at 9:00 PM and my flight to Kigali would depart the following night, at 10:45 PM. It gave me pretty much an entire day in Addis Ababa, which was an opportunity I wasn’t going to pass up on.

I won’t lie; I was expecting bureaucracy and a line that resembled the opening night of a Star Wars movie at the one counter for visas at Bole International Airport. But although it wasn’t exactly free from bureaucracy and long lines, they seemed to move well and I was able to get my visa (paid in cash with US dollars) without much drama. 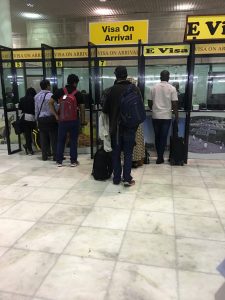 I then changed my currency and discovered that I had somehow wasted over 90 minutes since landing. I couldn’t blame it on the airport or the lines. Somehow I found a way to dilly dally in the airport for over an hour (twice I left the line for visas to look for a squirrel). I had made arrangements to have my hotel pick me up and I was certain that the driver had assumed I missed my flight and left. It was after 10pm and I was assuming he had better things to do than sit in the airport parking lot all night. After all, the hotel I booked, Hotel Lobelia, ran me a mere $51 on Hotels.com. It wasn’t reasonable to expect a $50 hotel room to come with a driver waiting for close to two hours at the airport.

Fortunately for me Hotel Lobelia was all about exceeding expectations. Waiting for me was my driver and the van from Hotel Lobelia. The hotel was a mere ten minutes from the hotel and I was able to get checked in quickly and call it a night.

The following morning I had something that sort of resembled an agenda in place. The Red Terror Martyrs’ Memorial Museum was going to be the first stop, and if need be the only stop. I was a day away from Kigali…and the genocide memorials and museums documenting the terror of the Rwandan Genocide. But in a strange way I felt that this was something arguably more important. The Holocaust is forever seared in our collective memory. And for me Bosnia and Rwanda were equally traumatic since I could remember watching them unfold. A handful of brave journalist risking their lives to document the horror unfolding…and challenging the world to stand up and fulfill humanity’s most empty promise: never again. Sadly the world chose to not to intervene. But we couldn’t ignore. Even in Cambodia we couldn’t ignore as the aftermath of the genocide came to light.

But Ethiopia was different.

I had planned to simply take a cab to the museum, and then just sort of figure out what was next from there. Outside the Hotel Lobelia I encountered Zelalem Chanyalew, aka Zola Rich. My first response was dismissive, he offered to take me to the museum for 200 birr (about $8), which I balked at (I was told it would be around 150, or a little under $6). But I nonetheless hired him with the intention of just getting to the museum and then playing it by ear. He then made me a deal I couldn’t refuse. I could hire him for the day for under $50 USD. Considering I had to be back at the airport later that afternoon and considering how spread out Addis Ababa was it made a lot more sense to tackle the city this way than to aimlessly wander from location to location.

We soon arrived at the Red Terror Martyrs’ Memorial Museum, a small and rather unassuming museum and memorial. The statue in front featured a harrowing image, three women and a single phrase on the plaque below them: “never ever again.” 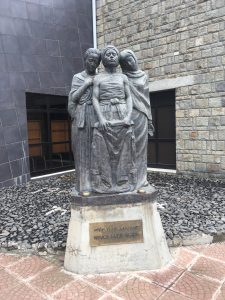 It was depressing in that it seemed to prove a most uncomfortable truth: “never again” had already proven to be hollow and meaningless. Perhaps the extra “ever” would give it the forcefulness that “never again” lacked. But then again, Syria was happening as I gazed upon the statue. Maybe it was time to revisit “never ever again” as well. Maybe they should just say something that better summed up the genocide in Ethiopia…perhaps “screw you all for letting this happen…and screw you again for continuing to let this happen.”

The museum itself, which was technically free of charge, was a somber and yet fascinating history of a dark chapter of Ethiopia’s history: the history of the Derg. The Derg was the name given to the Communist military junta that overthrew the reign of Emperor Haile Selassie I, setting up the People’s Democratic Republic of Ethiopia. Jon Stewart made a joke in his book America about how the more number of inherent lies in a countries name was directly connected to the level of oppression of that country (just pick up the book yourself, it is a lot funnier in print and a lot funnier when told by Jon Stewart. You can find it on page 185). Needless to say the name change from Ethiopian Empire to People’s Democratic Republic did coincide with a transition from an undemocratic monarchy that nonetheless had some positive qualities to it to pure hell on earth. The museum discussed the coup that lead to the fall of the Empire and the rise of the Derg before they went into the genocide that followed. As with most genocide museums, the image and photos of the victim’s portraits hits you harder than anything else. You can’t help but relate to them when you see them staring at you. 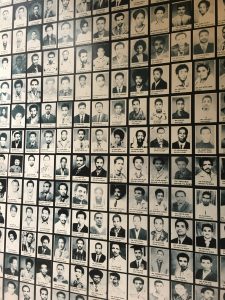 Some of the photos appeared to be mug shots, but most appeared to be portraits. Some of the people were smiling, although not all. But regardless of if they were a man or woman, or if they smiled or tried to look serious…the knowledge of what was to follow after these photos were taken was powerful…and horrifying. 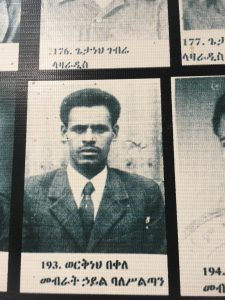 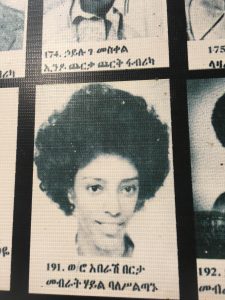 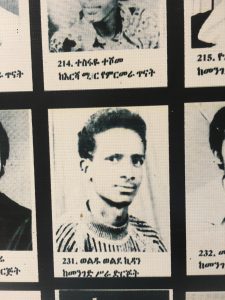 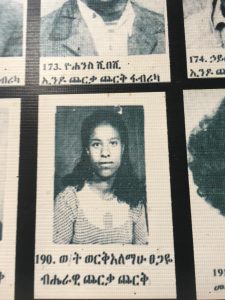 The display then featured photos of Derg loyalist in the height of the Red Terror, rounding up suspects (most who would be tortured and killed) and seizing “contraband” (such as radios). 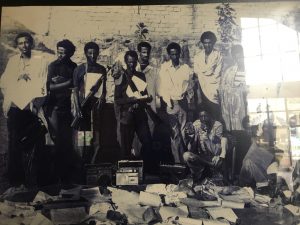 More victim portraits followed and then a horrific display of a shirt worn by a victim of the Derg when shot. 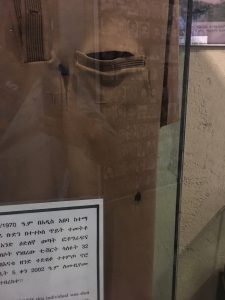 The man survived the attempted execution but his mother kept the shirt with the bullet hole. It was harrowing…but what followed was even more powerful. A room dedicated to the victims buried in one of 725 mass graves outside of Addis Ababa included a display of the remains of hundreds of victims. Many of the remains were displayed with the rope they were bound with and many also included a photo of the victim next to their remains. It was a stark reminder of the human toll of the Derg’s genocidal reign. 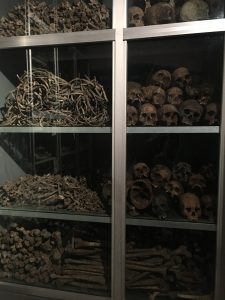 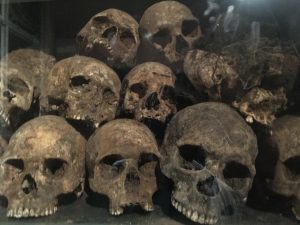 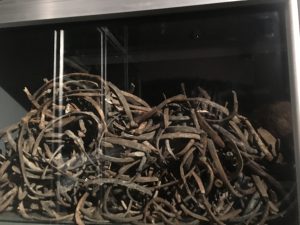 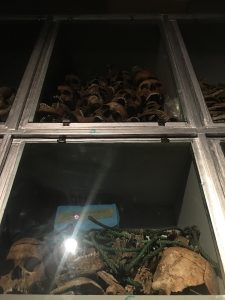 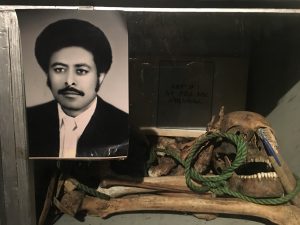 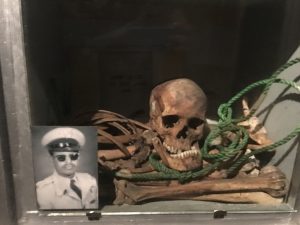 As I left I took a moment to speak with an employee of the museum who had been imprisoned by the Derg as a youth. Arrested in 1974 he spent the next eight years in custody without a trail. Once he was released he was continuously hounded by the Derg and would spend the next several years in hiding.

The museum and memorial was very much a gut punch, but Zola had a full schedule planned for me and once I left he drove me to our next stop: the Holy Trinity Cathedral.

12 Replies to “Travel: A long layover in Addis Ababa, Ethiopia (Part One)”