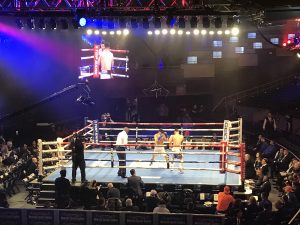 The Southwest is off to a solid start in New York as Mexican brawler Abdiel Ramirez, 142.4, scored and upset against local boy Michael Perez, 142.6 at 0:54 of round eight.  Ramirez, who hails from Ciudad Juarez, pressured the Newark, New Jersey native relentlessly from round one.  The Mexican dropped Perez in  the closing minute of round one (although it did appear to be more of a slip) and continued to pressure Perez relentlessly in rounds two and three. Perez bounces back effectively in round four, dropping the Mexican with a counter right uppercut/cross. But even after dropping Ramirez he was unable to slow down the relentless pressure of the Mexican and by round eight it appeared that he had dug himself a large deficit on the scorecards. Not willing to leave anything to chance Ramirez slammed on the accelerator in the final round, pressuring Perez on the ropes beforedroppinng him with a pair of uppercuts. The fight was waved off without a count.  With the win the Ciudad Juarez based brawler improves to 24-3-1, 22 KOs. Perez drops to 25-3-2, 11 KOs.