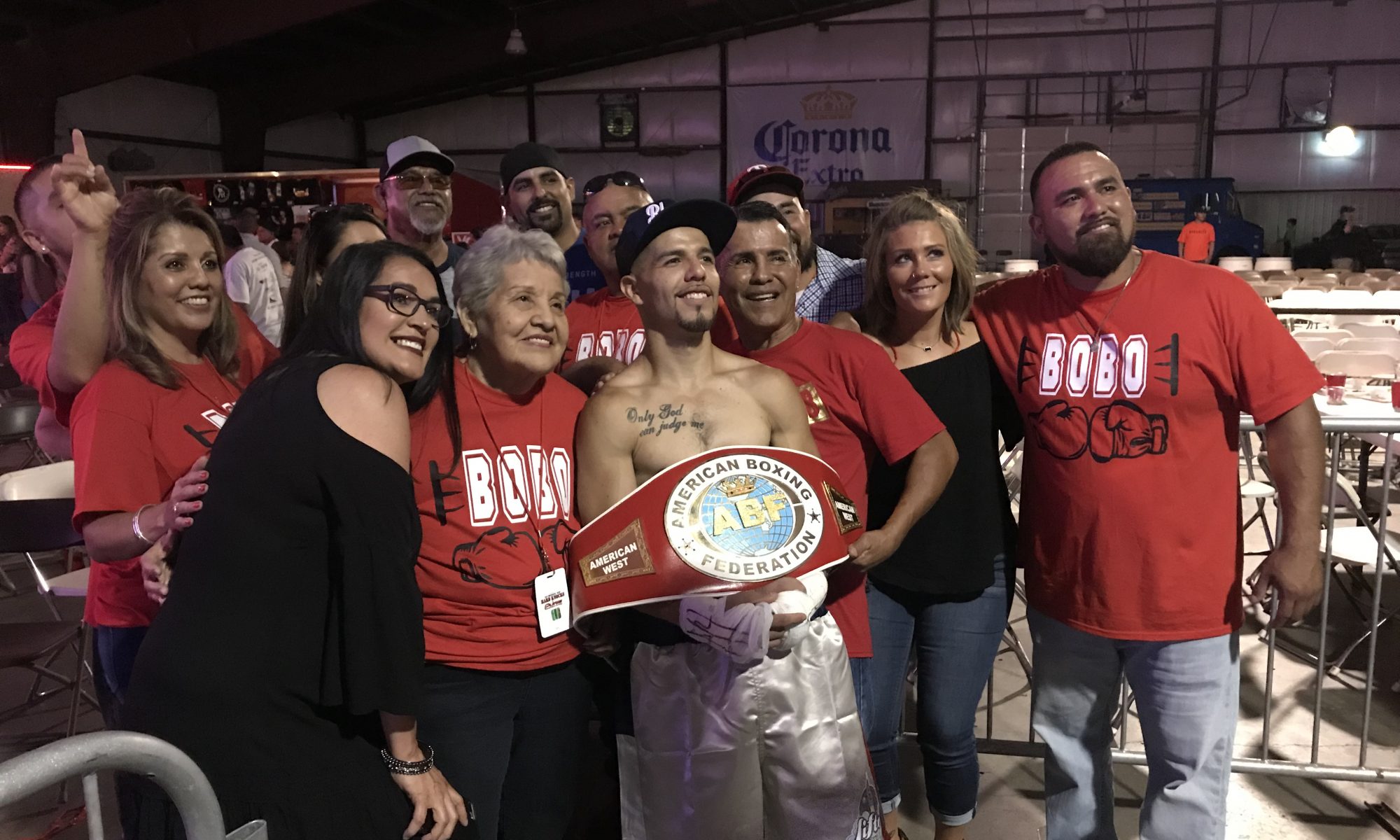 Undefeated lightweight Abel Navarrete Jr. made a statement in front of his hometown fans last night, destroying slick boxing southpaw Dwayne Bonds of El Paso in two rounds. The School of Hard Knocks Boxing and Golden Eagle Promotions fight card took place at the Azteca Music Hall in Amarillo, Texas where a packed house came out to support several local prospects including the highly touted Navarette.  Although Navarrete was the prohibitive favorite going into the fight, there was nonetheless recognition from fight fans that this was going to be a step up in class for “Bobo.”  The southpaw Navarrete’s first four opponents had a combined record of 4-34-1, and although Bonds was coming into the fight off a loss to undefeated prospect Omar Juarez, he was still seen as a borderline prospect in his own right.

And early in round one it looked like the southpaw Bonds had the skill set to potentially frustrate the undefeated Amarillo native. Bonds, 134, pumped a quick jab and seemed to possess a tight defense that would prove difficult to crack. But Navarrete, 133.6, showed maturity in the opening round, patiently stalking his opponent and cutting the ring off like a seasoned veteran.  Although Bonds initially seemed to be a bit more active than Navarrete, it was clear that Abel’s stalking was going to pay dividends if he found his opening.  That opening would ultimately come in the closing 30 seconds of the round. Bonds backed into the ropes where Navarrete jumped on him and landed a solid left that sent the El Paso native to the canvas. Bonds, who lost his mouthpiece as well with the punch, rose on wobbly legs but he was saved when referee Neil Young heard the ringside bell (which appeared to have been rung by accident) and stopped the round thinking that three minute had passed.  The mistake was quickly rectified but it gave Bonds several valuable seconds of recovery time. Navarrete nonetheless finished the round unloading on Bonds.  Although Bonds started round two behind the jab and appeared to be boxing cautiously to start the round, it soon became apparent that he had not recovered from the disastrous opening round.  After stalking the fleet-footed Bonds, Navarrete was able to cut off the ring and had his man backed into a corner. Pinning Bonds to the ropes, Navarrete pounced like a lion and unleashed a flurry upstairs.  Bonds avoided most of the shots but the talented Amarillo native’s combinations were a thing of beauty and a perfectly timed hook to the chin hurt the El Paso native and sent him to the canvas a second time.  Bonds rose on shaky legs at 8, and wisely tried to box his way out of trouble behind his quick jab.  But a short right hook from Bobo staggered Bonds and send him reeling into the ropes.   Referee Neil Young saw enough and decided to wave the fight off at 1:40 of the second round.

With the win Navarrete won a regional title (the ABF Western Continental Lightweight championship) and sees his record improve to 5-0, 3 KOs.  Bonds sees his record fall to 3-3-1, 1 KO.  The fight was scheduled for six rounds.

In the co-main event cruiserweight John King, 203.2, destroyed debuting Bryan Butler, 201.2, in only 53 seconds. The fight was a complete mismatch from the start as King hurt Butler with a hard hook to the body seconds into the fight.  Butler shut down and covered up in the corner where he continued to turn his back to King.  After Butler turned his back to King after being warned by Referee Robert Chapa, and having thrown no punches whatsoever, Chapa saw enough and waved off the mismatch in under a minute. Butler complained loudly to both Chapa and King, although to King’s credit he took it all in stride.  But Butler’s complaining didn’t endear him to fight fans in Amarillo who recognized that turning one’s back to an opponent and throwing no punches doesn’t give a fighter much of a right to complain about a stoppage. King sees his record improve to 2-0, 2 KOs but as of yet it is hard to tell what sort of prospect he is as neither of his two professional opponents brought much to the table.  Butler sees his record fall to 0-1 and based on his performance in Amarillo it would probably behoove the Texas Boxing Commission to consider pulling his license.

Amarillo middleweight Dylan Nicholson, 158.6, showed a marked improvement in his second professional fight as he stopped Dimmit Texas’s Isaac Sifuentez, 159.8, in the first round.  Nicholson turned pro in the same ring back in January with a second round knockout over an overmatched opponent and seemed to come into the ring that night with several bad habits like walking in with his chin up and his hands down.  But the Amarillo native clearly refined his game since January and looked considerably better as he boxed intelligently and kept his showboating to a minimum.  Sifuentez was hurt a minute into the round with a body shot and was felled less than a minute later when Nicholson went back downstairs and cracked a hard hook under the ribs. Sifuentez was visibly in pain as referee Neil Young reached the count of ten at 1:46 of the opening round.  With the win Nicholson improves to 2-0, 2 KOs while Sifuentez falls to 0-3.

Clovis New Mexico’s Nikko Nathan, 165.8, kicked off his career in impressive fashion as he scored a dominant win over fellow rookie Eloy Valverde, 159.8, over four rounds.  Valverde tried to use his speed and footwork to shoeshine the New Mexican with quick combinations upstairs but he simply couldn’t keep Nikko off of him in the opening round.  Eloy Valverde seemed to find a home for the uppercut in round two and squeezed out a close round thanks in part to his quick combinations upstairs and footwork. But the Amarillo native was unable to derail the pressure of Nathan and by round three Eloy was not throwing any combinations anymore.  Although Nathan was visibly tired as well by round four, he nonetheless continued to push forward and pressured the local boy, cementing another solid round en route to a unanimous decision victory.  Two judges (James Moreno, and Javier Martinez) scored the fight 39-37 for Nathan while the third (Neil Young) had Nathan pitching a shutout and scored the fight 40-36. Fightnews also scored the fight 39-37 for Nathan.

Undefeated local boy Mobley Villegas, 124.6, showed world class talent as he demolished the normally durable Israel Camacho 121.4, in two rounds. Villegas, who many boxing fans in North Texas consider to be one of the State’s better young prospects, was widely expected to win against the tough Camacho.  But as Camacho had never been dropped and had taken San Antonio prospect Jose Martinez the distance twice few were expecting an early knockout.  However Villegas proved to be an effective counterpuncher and snapped the head of Camacho back several times in the opening round as Camacho tried to jump in with overhand rights. Camacho to his credit continued to pressure the undefeated prospect in round two but Villegas caught him coming in and unleashed a furious combination upstairs on the Houston brawler as he leaned back into the ropes.  Referee Neil Young jumped in and stopped the fight at 1:58 of round two.  With the win Villegas improve to 2-0, 2 KOs while Camacho slipped to 1-3.

In a four round fight undefeated Rudy Montenegro, 138.8, avenged the only blemish on his record as he won a four round unanimous decision over Belen New Mexico’s Derek Perez, 139.6.  Perez held Montenegro to a draw back in May of 2018 and in round one it was clear that Perez recognized that he could pull off the upset as he jumped all over the Amarillo native in the opening round.  Perez pressured Montenegro and manhandled him at times, even throwing him to the canvas during a clinch.  But after five rounds of boxing over two fights Montenegro finally figured out the unorthodox style of Perez.  By round two he began to find the exposed chin of taller Derek Perez, who often walked into his chin high in the air.  By round three Montenegro had taken complete control, although Perez was still game and pressuring Montenegro.  But each time Perez closed the gap and started applying pressure Montenegro immediately fired back and never let the New Mexican regain the momentum.  Montenegro cemented a dominant fourth round with a right to the chin and counterpunched effectively for the rest of the round.  All three judges (Neil Young, James Moreno, and Javier Martinez) scored the fight 39-37 for Montenegro, who improves to 3-0-1, 1 KO.  Perez sees his record slip to 2-11-1, 1 KO.

“Shout out to the Perez’s,” Montenegro said after the fight.  “They always bring the pressure.”

In the opening fight of the night debuting Darrius Battles, 173.8, of Amarillo kicked off his professional career with a first round demolition of fellow rookie John Rendon, 168.4, in only 46 seconds.  Battles started the round patiently stalked his opponent but immediately brought the thunder down when a hard right hand staggered the Midland native.   Referee Neil Young jumped in and waved off the fight with a hurt Rendon being battered all over the ring.

The Amarillo Ambush 2 card proved to be another knockout for promoter Isidro Castillo.  Boxing fans in Amarillo will not have to wait long as another card is scheduled on July 27th featuring several of the same fighters from last night’s show.  Castillo and Eric Gutierrez of School of Hard Knocks Boxing will be heading to Midland, Texas on July 20th for a card featuring former heavyweight champion Oliver McCall.