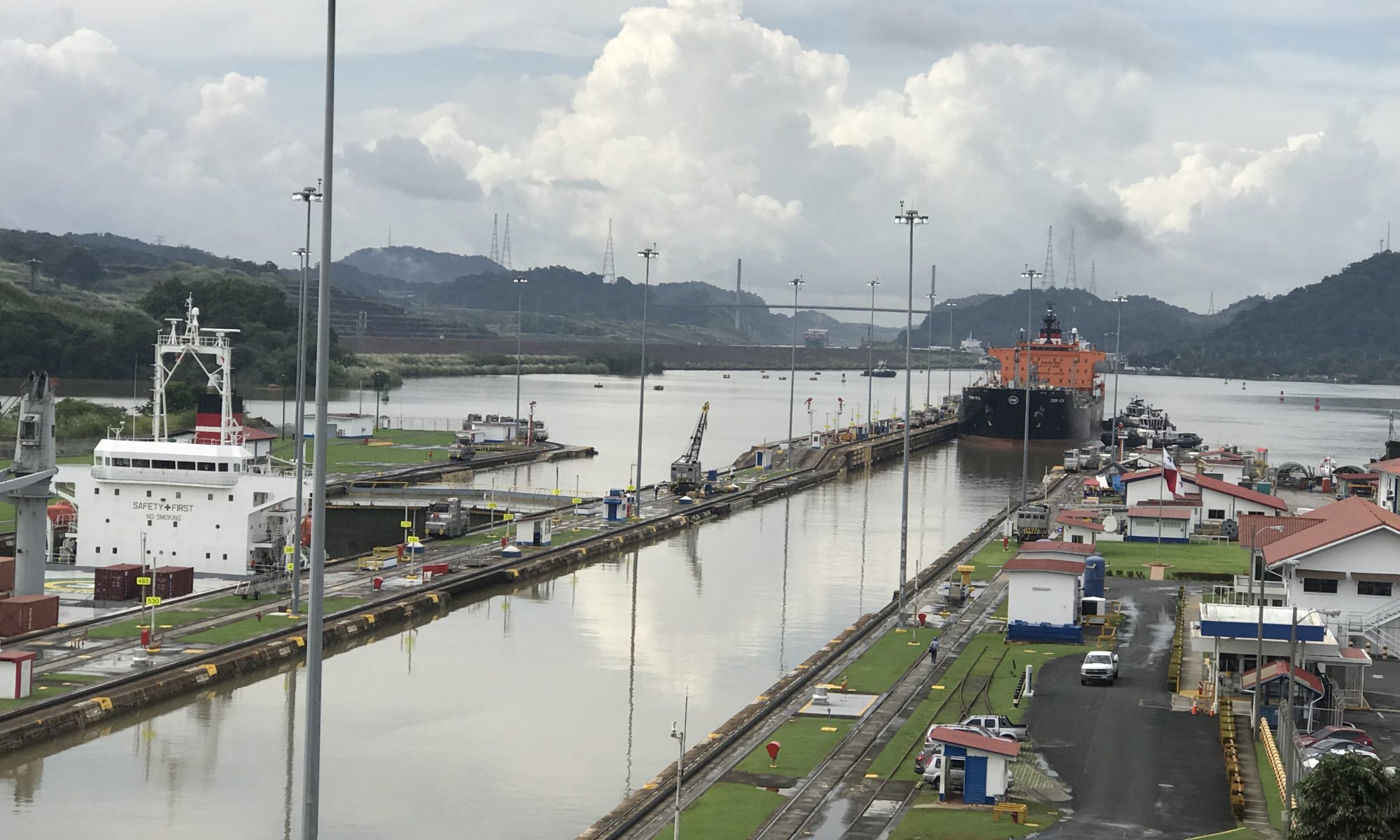 Needless to say, I have had more than my share of layovers in Panama City.  But the city, and the country, had always escaped me.  Back in 2012 with an overnight layover at PTY I was able to explore the city somewhat.  But it was a rush job, and I didn’t really feel that I really saw the city (although my cab driver did show me a few sites that were off the beaten track like the house John McCain use to live in).  I saw the Panama Canal from the side of the road at a rest stop and the rest of the sites…well, I saw those from the taxi cab.

But with the 31st Annual WBO Boxing Convention being held in Panama City this year I was given a rare opportunity: the chance to really visit the elusive city whose charm I always brushed up against but had yet to experienced.

Well, it’s one hell of an airport.

I know, I know…I usually am not such a Debbie Downer.  And right off the bat, the WBO Convention was an absolute knockout.  Hosted by the Hotel El Panama I couldn’t ask for a better locale for a boxing convention.  And seeing local boy Jason Sanchez win the WBO Youth Title in Panama City while sitting a row over from “Manos De Piedra” Roberto Duran was a memory that I won’t forget anytime soon. 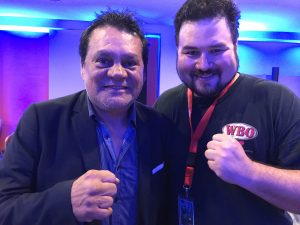 But at the end of the day Panama City itself felt a little like an Epcot Center exhibit of what a Latin American city was suppose to feel like.  Panama was clean…too clean.  It was prosperous…but somewhere between the Trump Towers and the skyscrapers and international banks I couldn’t help but wonder is something had been lost.  Because in some ways Panama City felt like Miami.  A big, thriving economic powerhouse with a McDonald’s and a Starbucks on every corner and lots of traffic.  A typical big city.  But a city that in many ways was a cookie cutter copy of so many other big cities. 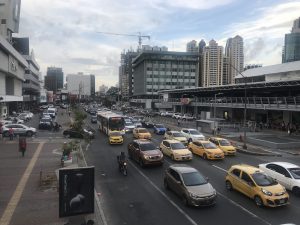 But then again, it is easy for me to say that.  For the Panamanians who are benefiting from  the economic prosperity and growth there is probably no complaints.  After all, Panama and Costa Rica are the two most successful and prosperous Central American nations.  While Nicaragua teeters on Civil War and Honduras sees thousands of refugees flee their nation Panama sits back and enjoys nearly 6% annual growth and a GDP per capita of over $24,000 per citizen according to the IMF.  Considering both Honduras and Nicaragua are hovering around $5,000 you can understand how Panama is a nation on the rise and an economic powerhouse of the region.

Maybe that is the price to pay for economic growth and one of the highest standards of living in Latin America: a certain loss of uniqueness. 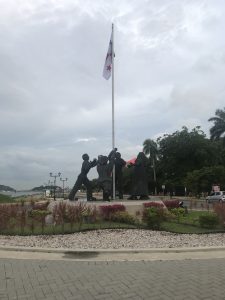 My time in Panama City was admittedly spent mostly at the Hotel El Panama where I covered the events associated with the World Boxing Organization convention, but I did get an opportunity to visit some of the sites in the city.  Most notably I had two visits to the Miraflores Locks and the Panama Canal.  I went with my father and I couldn’t help but think about my grandfather when we went.  It was well known in my family how my grandfather loved to see the Soo Locks whenever he was up in   Sault Sainte Marie. Michigan.  He would find a bench on the river and sit down and just enjoy the modern marvel that was the locks.  I couldn’t help but feel like my grandfather was with us as we made our way to the Miraflores Locks…to the worlds most famous locks.

Until we got there and we discovered that at least half of Panama was with us at the locks.  Sadly, the Miraflores Locks are designed for functionality…not tourism.  And the small museum, theater, and viewing deck just can’t handle the number of tourist wanting to see one of the great wonders of the world. 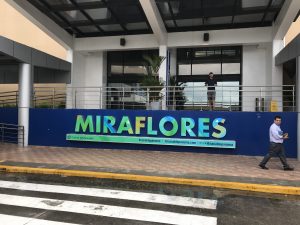 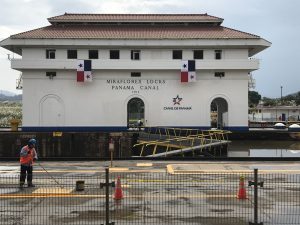 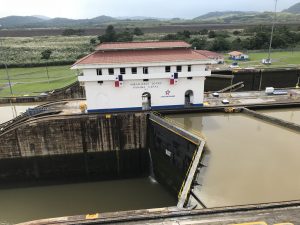 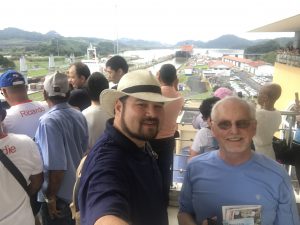 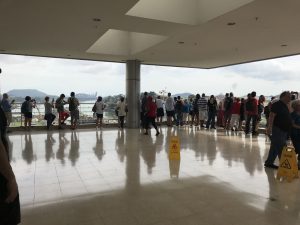 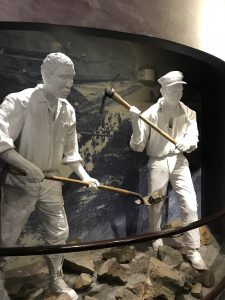 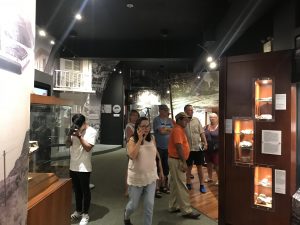 We paid $30 for dual tickets which allowed us to also see the Biomuseo (Biomuseum) located near the Amador Causeway, which was also listed as one of Panama City’s “must see” attractions.  Sadly, I was tied up with my report on the third day of the convention and we didn’t get to the Biomuseo until five minutes after they closed.  Still, the guide gave us a nice tour of the outside of the building and some of the history of the region.  And from the museum we were able to briefly walk down the causeway and take in an amazing view of both the Bridge of the America’s and of the City itself. 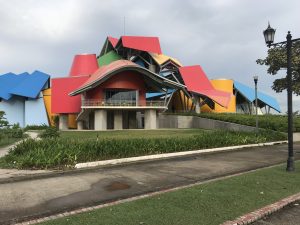 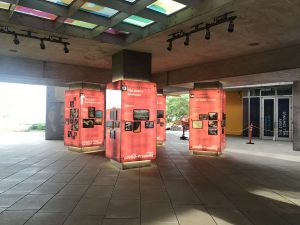 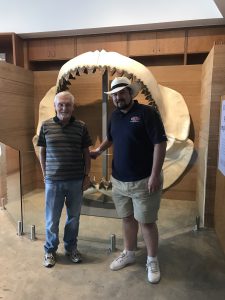 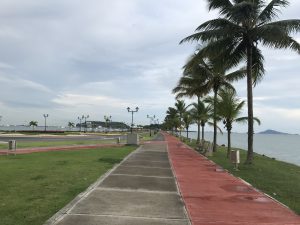 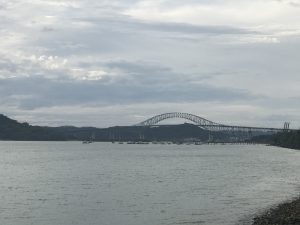 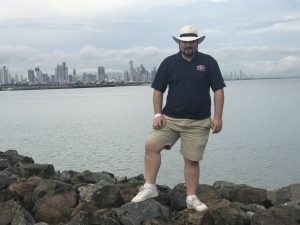 With the sun coming down we made a quick stop to the old town (Casco Viejo) which ultimately  felt like a somewhat less impressive version of dozens of other old towns I visited in Latin America. 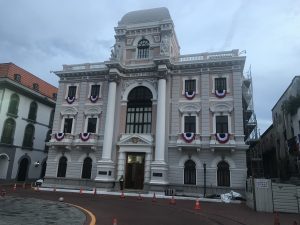 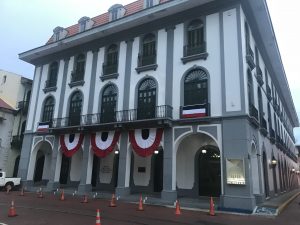 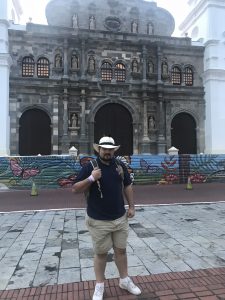 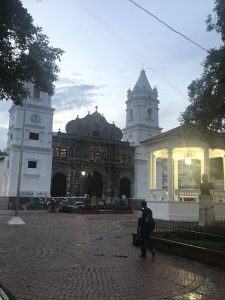 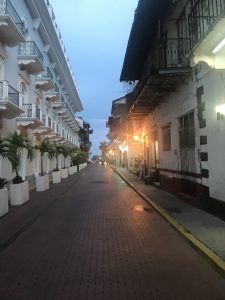 Even our visit to the Multicentro Mall seemed underwhelming.  The Mall was deserted, as was the one Casino we went inside…and I couldn’t help but wonder if Panama City had reached that point in economic development where Amazon replaced Best Buy. 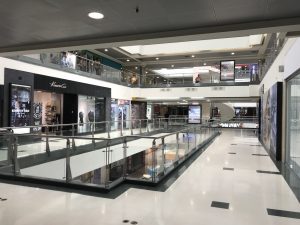 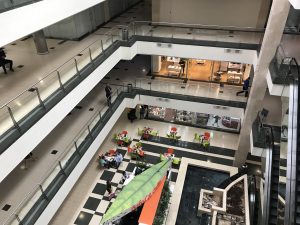 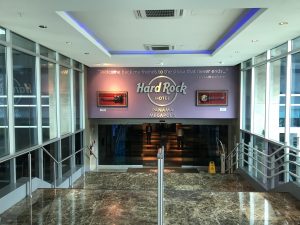