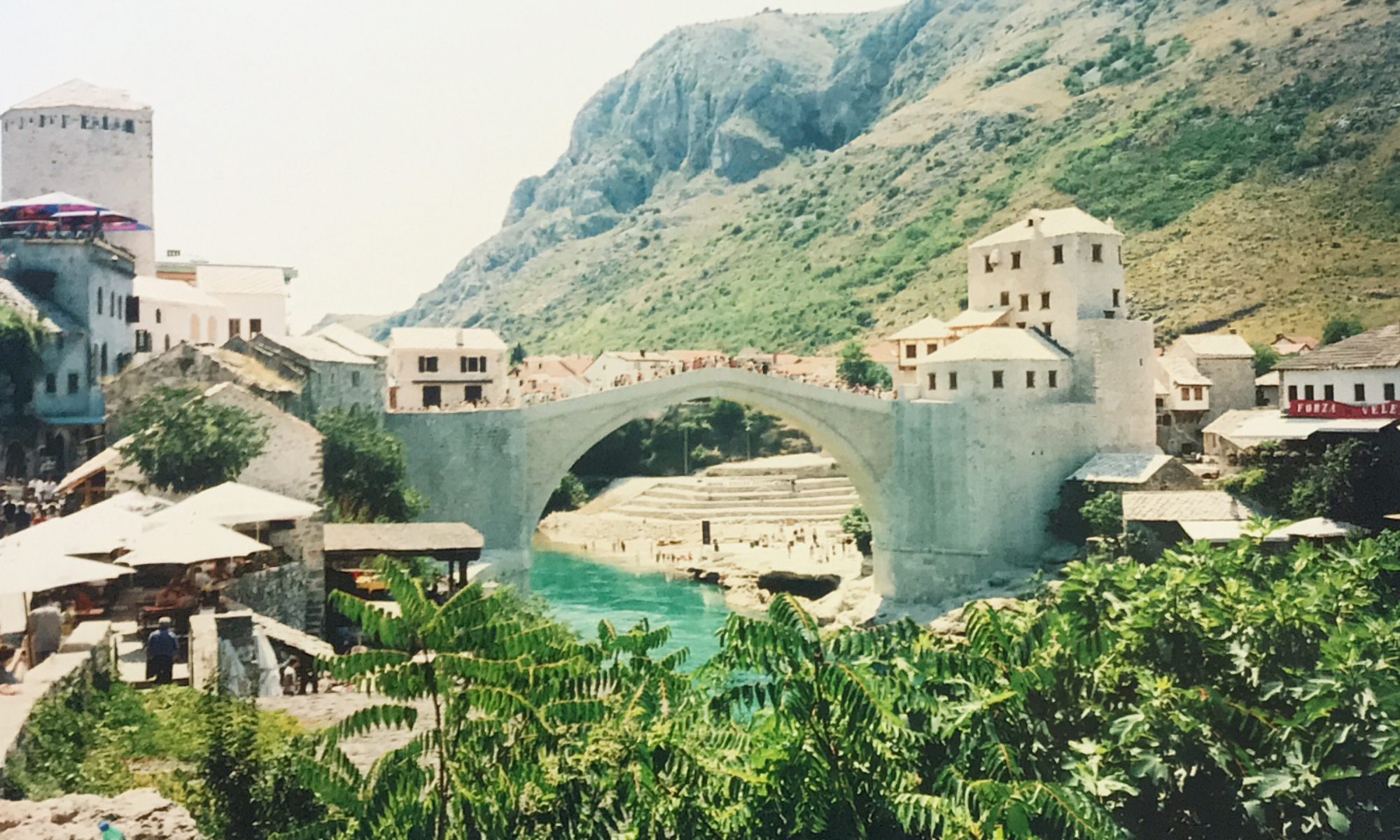 I realize I may be two weeks late, but it occurred to me that we just passed a very dubious anniversary earlier this month.  November 9, 1993…twenty five years ago.  On that date we witnessed what would go on to be perhaps the most iconic image of the Bosnian Civil War: the destruction of the Stari Most Bridge in Mostar.

Admittedly I’ve already posted about my view that we sometimes ignore the suffering of people in a civil war when it doesn’t affect us.  In those instances it is the destruction of a building, a historic site, or a bridge, that seems to rile us into action…or at least get us to care.

It was Bosnia where I first noticed this phenomenon.  As a youth I remembered a photo of what appeared to be a Nazi concentration camp on the cover of a 1992 issue of Time Magazine.  And yes there was anger and outrage…but ultimately it was followed by inaction.

But when Croat rebels destroyed the Stari Most Bridge in Mostar the following year it seemed to be a turning point.  A moment in which the world collectively started to say “we have to do something.”  Sure it took three more years for the war to actually end (and less than one year for the Croats and Bosniaks to reach a settlement) but there was something different about the outrage over that bridge.

As a kid I suddenly knew about the legendary Ottoman architect Mimar Sinan, whose student (Mimar Hayruddin) who built the bridge in the 1560s.  I suddenly became a student of that bridge.  And yet it wasn’t until years after the war that I would learn the history of Harush Ziberi, whose fearful face in an iconic photo would haunted me for years.   I didn’t know his name or his story, but to me this was the face of the Bosnian Civil War…and sadly his story, unlike the story of the Bridge in Mostar, would not have a happy ending.  Ziberi, I would discover years later, was executed by the Serb paramilitaries that captured him shortly after this photo was taken.

But the Bridge would be rebuilt.  The tourist would come back to watch young men jump into the Neretva River below.  The city of Mostar would again be forever joined at the hip with the bridge that connected it’s Croat and Bosniak citizens across the river below.  Yes, there would be scars…but unlike with Ziberi there would a future for Mostar and the bridge.

For me, my internship in Bosnia in 2004  after my first year in Law School did give me a rare opportunity to  witness the return of the Stari Most Bridge.  I was living in Sarajevo in the summer of 2004 and although I didn’t get a chance to go to Mostar on July 23rd, 2004 for the official opening of the rebuilt bridge, I was able to visit later that month with a handful of my fellow NGOs from Denver, Colorado.

Right off the bat I could tell that the bridge was very much an integral part of the city and I had trouble imagining how they got by over the last eleven years without it.  Dozens of young men stood in swimsuits on the bridge offering to jump into the shallow river below (for a small fee).  Although the bridge stands less than 80 feet from the river below you learn to appreciate how high 78 feet really is as you watch the young man crawl over side and jump feet first into the river. 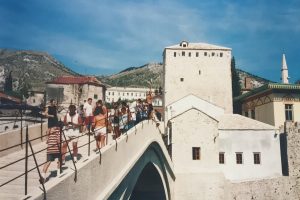 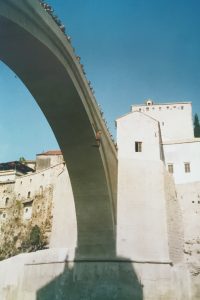 We had an NGO with us named Ben Porter who possessed an adventurers spirit and he did attempt to do the jump himself, but he was strongly discouraged by the locals, who probably didn’t want to deal with having to fish a dead American out of the river.  I’m sure there is a method to the jump, one that your typical American thrill seeker would be unaware of…but I wouldn’t have bet  against Ben pulling it off.  He seemed to have a knack for being able to do the impossible when it came to things like jumping off bridges.

The city of Mostar itself was a beautiful place, but the scars were still ever present.  Sure a lot of the main streets were cleaned up nicely, but all you had to do was go down a quiet ally or side street to see the bullet holes in the side of the buildings.  To see a stark reminder of the war that seemed to define the nation to many foreigners.  Bosnia is, and probably will remain, a word associated with war to many people.  Even those who were born after the war, the word itself has developed a new meaning.  Lebanon.  Chechnya.  And Bosnia-Herzegovina. 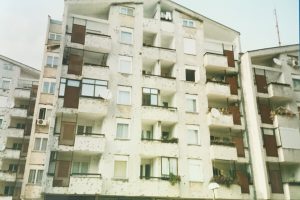 Then again, that was almost fifteen years ago.  Mostar, it appeared to me in 2004, would be a city that found a way to overcome.  I could tell that if Bosnia-Herzegovina would spend decades trying to heal the wounds of the conflict…and fix the endemic corruption that was birthed from that conflict and which seemed to hold the nation back.  But Mostar seemed different.  It would not be a city that let the war define them.  They would not forget…but they would overcome.  As long as they had that bridge they would overcome.

But a recent visit to Tripadvisor seems to indicate that maybe that was a little too optimistic.  I hoped that maybe by now the scars of war have been plastered over.  But it appears that the bullet holes still can be seen on the side of the old shopping mall in Mostar. 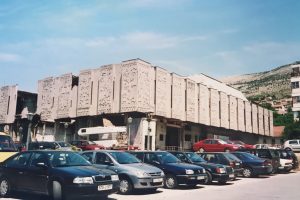 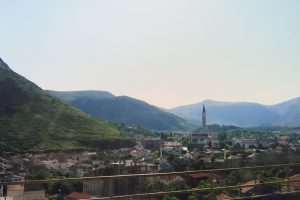 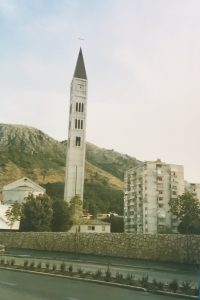 There are no shortages of memories of the war in Bosnia, and cities like Sarajevo and Srebrenica  are yes even Mostar don’t want to let anyone forget what transpired from 1991-1996.  But Mostar seemed to want to give tourist another image of Bosnia i Herzegovina as well…a more hopeful image.  I can’t blame them for that,  Mostar was a nice change of pace when visiting Bosnia.  It is a beautiful city whose identity doesn’t seem to have been molded by the war even after her most historic landmark was destroyed by it. 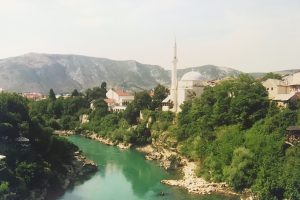 I just wish Harush Ziberi could have seen what it became.