The New Mexico boxing commission had an unusually busy weekend as the Land of Enchantment hosted a rare doubleheader featuring four of hottest prospects in the Southwest.  On Friday night, undefeated super middleweight Jorge Tovar improved to 4-0, 4 KOs as he blasted out journeyman Tavorus Teague in the second round at the Pan American Center in Las Cruces.  Nobody was expecting Teague, 165.6, to threaten the former amateur national champion, but the dominance and ease upon which Tovar, 165.4, dispatched the 43-fight veteran was nonetheless impressive.  Having never been forced to go past the first round as a professional, Tovar almost made it four straight first round KOs when a solid body shot dropped Teague in the closing seconds of the opening round.  Teague was able to rise, but the damage was done and Tovar easily finished him off in the opening seconds of round two with another body shot, prompting the stoppage.  With the loss Teague drops to 6-33-5, 3 KOs.

On the undercard of the Tovar-Teague fight, popular lightweight Stephanie Han, 134.4, improved to 2-0 with an entertaining decision over former amateur standout Destiny Jones, 136.4.  Han comes from boxing royalty in El Paso (her sister Jennifer is a former world champion and her brother Abraham was a former ranked contender) but in two professional fights she has clearly established that she is more than just a fighter with a famous last name.  Jones, who came into the fight with an impressive 2-0 record, had a solid game plan as she tried to bully her way inside and rattle the taller Han by turning the fight into a phone booth war.  But Han possessed a seasoned approach to the aggressiveness of Jones and counterpunched with picture perfect precision.  Although the fight was close after three rounds, Han put an exclamation point on her performance in round four, rocking Jones with a right hand and dominating the exchanges.  One judge scored the fight a shutout for Han while the other two scored it 39-37 for the local girl.  With the win, boxing fans in El Paso can safely say they have a real shot of having another world champion in their city before long.

The following night in Albuquerque former Olympic trial winner Abraham Perez made a strong argument that he is the hottest prospect in New Mexico as he scored a tough six round decision over a fellow undefeated prospect named Isaac Angulano in dominant fashion.  Although Perez won comfortably on the judges’ scorecard, it was still a solid test for the Albuquerque native.  Perez faced a determined and dangerous opponent who battled effectively over six rounds and landed a few solid shots on the local boxer.  With the win Perez improved to 5-0, 2 KOs while Angulano dropped to 3-1, 1 KO.

In a featured undercard fight in Albuquerque, undefeated heavyweight prospect Leonid Grachev improved to 5-0, 3 KOs  as he won a  unanimous six round decision over Manuel Eastman, who fell to 3-7-1, 1 KO.  It was a tougher than anticipated fight for Grachev, who was expected to be the fifth man to stop the Los Lunas native.  Nonetheless, Grachev still looked solid as he scored a shutout on two of the judges’ scorecards (with the third judge scoring it 58-56).

Boith fight cards had stacked undercard bouts featuring new and familiar faces in New Mexico and Texas.  In Las Cruces heavyweight Nick Tipton, 270.4, of Midland, Texas fell to 2-2, 1 KO after he elected to take a knee and surrender against former college football standout J.D. Ordunez, 277, in a four rounder.  Tipton started the fight boxing well against the shorter Ordunez, but he quickly gassed out and was unable to fight through his fatigue.  The fight was waved off at 0:59 of round three after Tipton took a knee two times in the round.  In a battle between 0-2 local junior middleweights, Garrett Lopez scored a devastating knockout over Anthony Jones in round four in middleweight fight.  Debuting Mike Bueno scored a stunning upset over fellow debutant Nick Hernandez of El Paso in a lightweight fight.  Hernandez was the more polished fighter, but Bueno used his lanky southpaw jab to brutal efficiency, scoring the stoppage at 2:47 of round two.  And in the opening fight of the night on the School of Hard Knocks Promoted show, Elijah Sweat of Las Cruces won a unanimous decision over Clovis New Mexico’s Antonio Matos in a heavyweight fight.  Both fighters were making their professional debut.

Rounding off the card in Albuquerque on August 13th, Katherine Lindenmuth won a tough split decision over Amanda Lovato in a four round women’s fight.  Two judges scored the fight 59-55 and 58-56 for Lindenmuth, who improved to 2-0.  The thirds judge gave the fight to Lovato by a score of 58-56.  Lovato sees her record fall to 1-2-1.  Heavyweight Dwight Maters stopped Brandon Heredia while Jordan Gregory won a hard fought decision over Lorenzo Benavidez over four rounds.  Martin Armijo stopped fellow rookie Adrian Torres by way of third round stoppage.  Cesar Alvarado won his professional debut with a decision over Daniel Garcia Flores (2-7, 1 KO) while undefeated Daniel Gonzalez improved to 3-0, 3 KOs as he stopped Ricardo Canales (0-1-1) in three rounds.  And rounding off the card Bekhzod Usmonov won his professional debut by way of a four round decision over Ricardo Alan Fernandez, who came into the fight with a 3-14-4 record.   The fight, which took place at the Manuel Lujan Jr. Exhibit Complex, was promoted by Legacy Boxing. 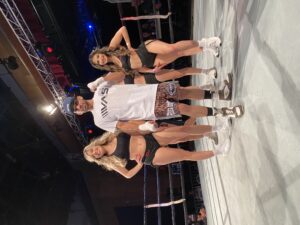 It will be a busy weekend of boxing for the state of New Mexico as two of the most promising young prospects in the Southwest headline separate cards in Las Cruces and in Albuquerque.  On Friday promoter Isidro Castillo of School of Hard Knocks Boxing returns to the Pan Am Center on the campus of New Mexico State University as undefeated prospect Stephanie Han (1-0) takes on a fellow undefeated prospect in Destiny Jones (2-0) in a lightweight fight.  Han, the sister of former world champion Jennifer Han and former world ranked contender Abraham Han, already has boxing insiders talking about a possible world championship fight in the near future, but she has a tough test in Destiny “Too Sweet” Jones of Texas.  Jones has looked dominant in her first two professional fights, and although there is no question that this will be a major step up in class for the Texan, it is also apparent that she is a solid prospect in her own right.  In addition to the Han fight, undefeated super middleweight Jorge Tovar, 3-0, 3 KOs, will look to extend his first round knockout streak to four in a row as he takes on journeyman Tavourus Teague (6-32-5, 3 KOs).  Most are assuming Tovar will come out on victorious, as Teauge has been stopped sixteen times in his career and has lost his last five fights by knockout.  But most fans are nonetheless excited to see a fighter who has already established himself as probably the most explosive young prospect in Texas and a few insiders grudgingly concede that Teague is a seasoned veteran who may show Tovar something he hasn’t seen before in the ring.

Rounding off the card in Las Cruces, heavyweight Nick Tipton of Midland (2-1, 1 KO) takes on debuting J.D. Ordunez of Las Cruces in a four rounder.  A pair of rookies clash in the lightweight division as Mike Bueno of Lubbock makes his professional debut against fellow debutant Nick Hernandez of El Paso.  Anthony Jones (0-2) of Albuquerque takes on Garrett Lopez (0-2) of Las Cruces in a light middleweight fight, and in a cruiserweight fight Ysidro Portillo (1-2) of Midland takes on Joshua Ramirez (1-0) of El Paso.  Journeyman Manuel Rubacalva (4-39-1) fights debuting Daniel Trevino of El Paso in a four round fight, and opening the card heavyweight Antonio Matos of Clovis, NM makes his professional debut against Elijah Sweat of Las Cruces.  Sweat is also making his professional debut.

The following night boxing will head north on I-25 as Abraham “Hammer” Perez (4-2, 2 KOs) takes on fellow undefeated prospect Isaac Anguiano (3-0, 1 KO) of Pomona, California in a loaded fight card promoted by Legacy Boxing featuring an eye-popping eleven bouts.  Perez is already the most talked about prospect in New Mexico and many fans are eager to see what he can do against what is widely seen as the toughest opponent he has faced to date.  Rounding off the Albuquerque card, undefeated heavyweight prospect Leonid Grachev (4-0, 3 KOs) takes on Manuel Eastman of Los Lunas (3-6, 2 KOs).  In a welterweight fight Daniel Gonzalez (2-0) takes on Ricardo Canales (0-0-1), while a pair of popular local journeymen battle in the light heavyweight division as Lorenzo Benavidez (3-3-1) takes on Jordan Gregory (1-3-2) in a four rounder.  Both Benavidez and Gregory have shown tremendous improvement over their careers and have earned a fan following as they revitalize their careers.

In a six round women’s bout Katherine Lindenmuth (1-0) takes on Amanda Lovato (1-1) in a flyweight fight.  Rookies Adrian Torres and Martin Armijo battle in a fgour round fight in the featherweight division while Brandon Heredia (0-1) looks for his first win as he takes on debuting Dwight Maters of Albuquerque in the heavyweight division.  Journeyman Daniel Flores Garcia (2-6, 1 KO) takes on Cesar Alvarado in a four round light heavyweight fight while Saul Gomez makes his professional debut against the veteran Alejandro Moreno (24-50-3) in a super bantamweight fight.  Rolyn Nex (1-0) of Bloomfield takes on David Espino (0-2) of El Paso in another super welterweight fight while James Rodriguez opens the card as he makes his professional debut in the super welterweight division against veteran Ricardo Alan Fernandez (3-13-4) of Ciudad Juarez.

Tickets for the August 12th fight show at the Pan Am Center in Las Cruces, New Mexico can be obtained at the box office or by calling promoter Isidro Castillo at 1-575-263-4942.  Tickets for the August 13th show in Albuquerque, which will take place at the Manuel Lujan Jr. Exhibit Complex, can be obtained by calling 1-505-382-5126.  Both events will be available online via PPV.  The Legacy Promotions card is available for $25 and the link can be found on their Facebook page, while the August 12th School of Hard Knocks Boxing show will stream online on theathleteinmetv.com and will be available for $19.99.