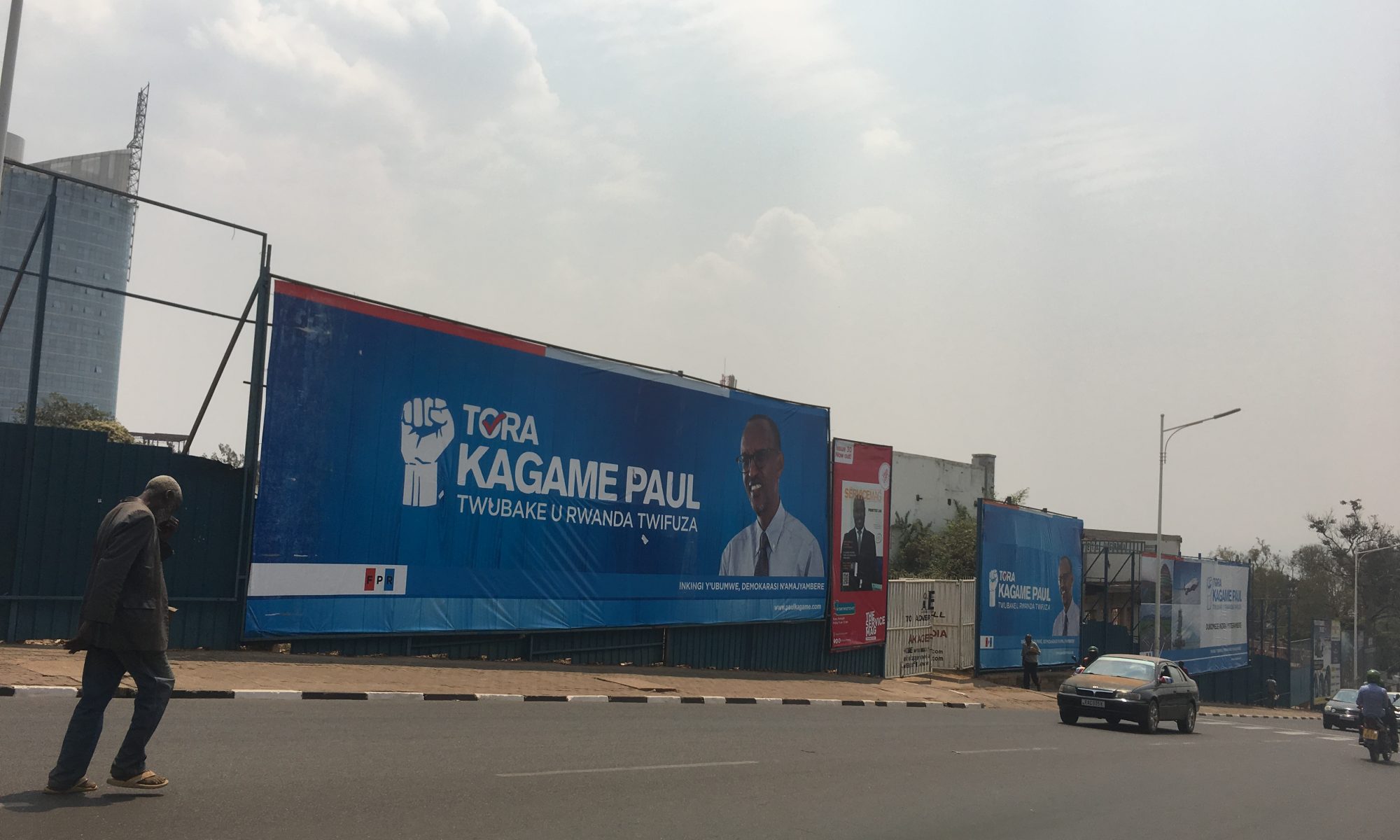 The moment I stepped off the plane into the Gregoire Kayibanda International Airport in Kigali, Rwanda I could tell that this wasn’t going to be your typical African vacation.

It was just shy of one AM and I was suddenly feeling the effects of eating raw meat from a butcher in Addis Ababa (read about it in my “One day in Ethiopia” update).  I was tired and I still had a visa to buy and immigration to clear.  Then I saw the first sign that Rwanda was pulling no punches in trying to change it’s international reputation. 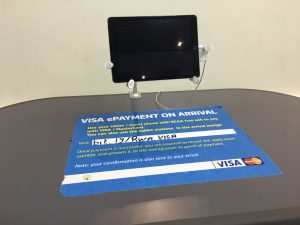 The option to pay the $30 visa fee from a tablet at the airport was really my first introduction to the new Rwanda, the nation eager to establish itself at the “Singapore of Africa.”  I assume there are some airports in the United States that have free iPads for public use, I just never saw them.  But I am pretty sure this is the only airport in Africa that has one of these, and I couldn’t help but feel this was not just about offering a convenient service for those who just arrived in the nation. It was an opportunity to make a statement.  It was an opportunity to tell us that whatever preconceived notions about the country we had, that they were most certainly going to be challenged.

I declined the opportunity to use the tablet, paid my $30 for the visa, and then saw the first introduction to on of Rwanda’s most famous pieces of legislation.  The ban on plastic bags.  A sign greeted those of us stepping off from Ethiopian Airlines flight 821 that plastic ban were prohibited in Rwanda.  Next to the sign was a woman at a table offering cloth bags for those who needed them. 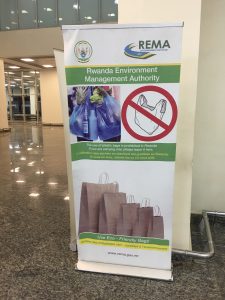 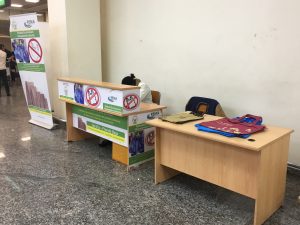 I quickly picked up my luggage and took a cab to my hotel: the Hotel des Mille Collines.  Booking on Hotels.com I got a room for two nights for about $125 a night (including tax) and I was told this was a unusually good price.  However I had been scanning the price on Hotels.com for a month before hand and that seemed to be the going rate.  Regardless, I wanted to stay there.  The film Hotel Rwanda burned in my memory and as morbid as it may seem, I felt a certain obligation to stay at the hotel that helped save so many innocent lives.  Ramada would get my money back in the States, but in Kigali the Hotel des Mile Collines would have my loyalty.

The drive to the hotel was notable in how…unspectacular it was.  In Africa every drive is a dose of sensory overload.  The sounds.  The chaos.  The energy.  The insanely bad drivers.  All are powerful messages to the Westerner that they are now in Africa.  But Rwanda was different.  Sure, it was 1 AM, but still…this was positively Swiss in it’s appearance.  The streets were meticulous and trees decorated the side of the road in perfect rows.

Arriving at the Hotel I was greeted by friendly staff and quickly decided to call it a night.  I had been surviving off three hours of sleep a night since arriving in Africa and the food was finally starting to catch up to me.  I would have tomorrow to explore the city, but tonight…I needed to recover.

Of course, my stomach wasn’t done protesting the raw meat in Ethiopia just yet.   My first day of Rwanda was spent mostly in the hotel, nursing an upset stomach and severe fatigue.  It wasn’t until my second day in Kigali that I was able to contact Alex, who was recommended to me by a guy working the front desk of the hotel.  I hired Alex to drive me around all day to whatever sites I wanted to check out.  I had an unusual request and I wasn’t sure if he could help me with it: I wanted to meet Rwandan President Paul Kagame.  I actually met him once before, when he spoke at my law school in 2004.  I knew he was campaigning and so I figured maybe I could use my press pass and somehow get an impromptu interview set up on one of his campaign stops.  No idea if I would be able to, but I figured I could try.

Only problem was Kagame was not in Kigali or anywhere near Kigali.  He was campaigning several hours away and I had already lost a day due to my illness.  So Alex instead took me to a tent where they were selling campaign swag. 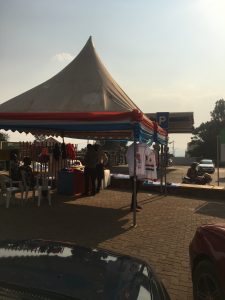 It was at this campaign stop where I got my first weird vibe about the election.  Kagame was legitimately popular, but I also noticed that there was not a single opposition sign to be found anywhere.  Not one.  Alex and others explained that Kagame simply had overwhelming support, and although I retain a healthy skepticism about claims like that I couldn’t deny that he was in fact immensely popular with…well…everyone.  Nobody had a bad word to say about him, and not in a North Korean newscaster sort of way.  They all saw how their lives had improved over the last twenty-three years and they all wanted him to continue to lead the country.  Rwanda had gone from being the worst place to live on the planet to being the jewel of Africa, all in 23 short years.  All this despite the fact that the nation lacks natural resources and had the stigma of anarchy and genocide on the world’s collective memory.  All of that had been accomplished due to good government and a determination to lift the country out of poverty.

But I’m sure even in San Francisco there was one guy with a Trump sign in his front yard.  At least one.

I asked Alex about the opposition candidates and he admitted that he didn’t even know their names.  This wasn’t a Democrat curb stomping a Republican candidate in Berkley, California.  This wasn’t Clinton v. Trump in San Francisco.  Hell, this wasn’t even Clinton v. Vermin Supreme.  This was something else: an opposition campaign that was dead on arrival.  The opposition candidates, one from the Green Party (Frank Habineza), and two independents (Philippe Mpayimana and Diane Shima Rwigara) have complained about intimidation.  But what the foreigner can see is not evidence of intimidation: rather we see evidence of…disproportion.  In the airport it’s the billboards and posters all proclaiming “Tora Paul Kagame.”  On every roundabout are RPF (Rwandan Patriotic Front) flags and on the back of busses are more campaign posters supporting Kagame. Public areas are painted with the colors of the RPF. 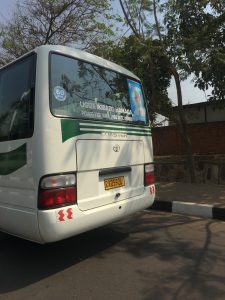 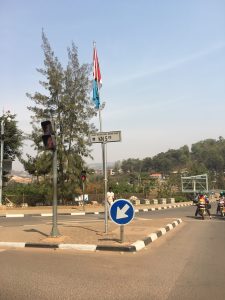 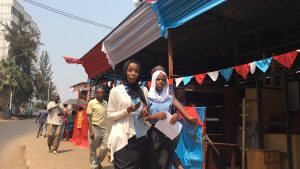 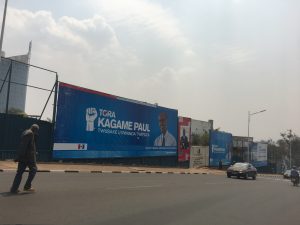 And nowhere to be seen is a single Green Party sign.  Hell, you could probably find a Green Party sign in Utah if you really looked for one.  But not in Kigali, where the message was clear: you can’t stop Kagame so you might as well get with the program.  But it is not out of realm of possibility to imagine he is in fact that popular.  Sure, he’s going to win 93% of the vote (or more) but let’s not forget that Mitt Romney won 90% of the vote in Cimarron County, Oklahoma in 2012.  90% doesn’t automatically mean this type of thing is going on.  There is a visible difference between Rwanda today and pretty much any other African nation and the legitimate lack of corruption was something that even his staunchest critics would grudgingly give him praise over.  And in any democracy there comes a point where the opposition starts to lose people not due to policy but  due to that fact that people want to be on the winning team.  There comes a point when the opposition becomes so weak that nobody wants to support them, even if they agree with their policies.

But still…not one Green Party sign anywhere.  Not one.

I buy a few t-shirts from the stand nonetheless, and this weird vibe hits me about the shirt I just buy, although I can’t place it. 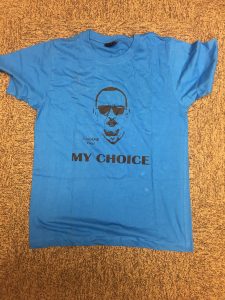 Alex gets a sticker placed on his hood and I see a sight that lifts my spirts ever so slightly: a guy selling fruit on the side of the road. 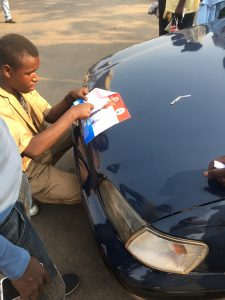 It’s not the fact that I’m hungry (I am) or that some oranges sound great right now (they do).  It’s the fact that I have found my first plastic bags in Rwanda. 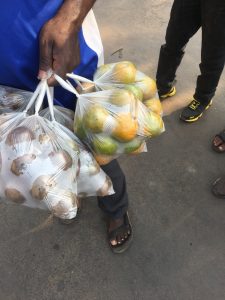 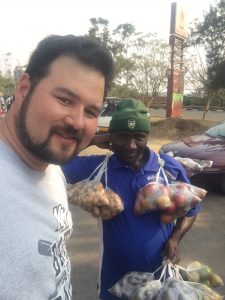 The street vendor is clearly skirting the law as he sells his fruit, something I mention to Alex.  Alex seems a little embarrassed but I try and tell him I don’t mean this as a negative.  In Singapore nobody dares sell gum out in the open. In North Korea nobody dares sell South Korean television shows out in the open.  In Rwanda the rules are in place, but there is at least a little visible pushback.  That’s a somewhat reassuring sign.  That’s how we roll in America.  Speed limit 45?  Everyone goes 50.  No Big Gulps in New York?  Screw that, I’ll bring my own cup/bucket.  Please don’t bring your guns to Chipolte in Texas?  Hold my beer.   I found it slightly reassuring to see a guy skirt the plastic bag ban in Kigali because it told me that maybe things were as good as they seemed.  Maybe Rwanda is a legitimate, albeit slightly dysfunctional, democracy.  Maybe Rwanda is really the African Miracle.

But I never could quite shake that lingering feeling I had about the t-shirt I bought for myself and a friend in Kigali.  Until I got home that was, and it dawned on me. 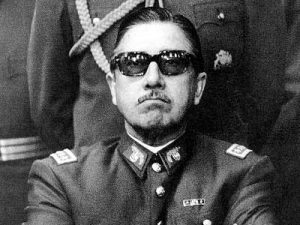