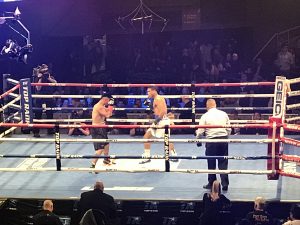 Denver based welterweight Daniel Calzada ultimately came up short in his clash with the talented and undefeated Brian Ceballo tonight at The Hulu Theater at Madison Square Garden in New York City. Calzada showed Ceballo early on why the New Mexican was widely regarded as one of the cagiest fighters in Colorado. Although Ceballo was winning the round with activity he still seemed to have trouble with the defense of Calzada. At times Calzada would successfully move his head to such effect that he had Ceballo throwing three-punch combinations that would hit nothing but air. But in the end the speed and strength of Ceballo was too much for Calzada. By round two Ceballo began to find a home for his right hand, although Calzada showed his toughness in standing his ground. By round three Ceballo was in total control and seemed to snap Calzada’s head back with right hands and left hooks. Still, the New Mexico born brawler refused to take a backward step and certainly impressed the capacity crowd with his grit and toughness. After four rounds of action all theee judges scored the fight 40-36. With the win Ceballo improves to 6-0, 3 KOs while Calzada slips to 16-20-3, 2 KOs. Calzada has only been stopped twice in his 39-fight career.