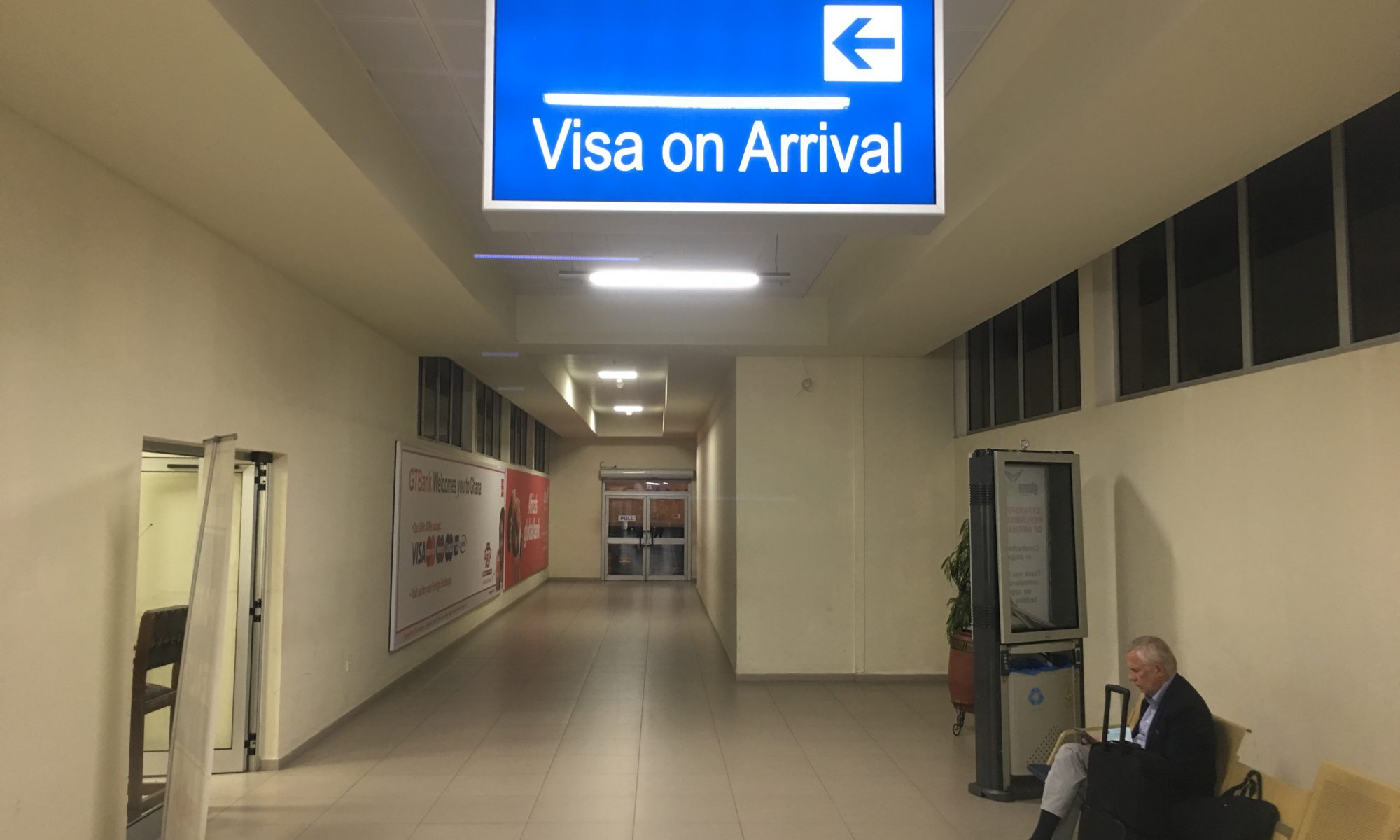 I was coming back to Ghana for ten hours…and I didn’t want to spend it in the airport. This proved to be a problem since my visa was only a “single entry” visa and I had already used my one entry into Ghana on that visa. This left few options.

The first was the ever dependable clueless American tourist routine where I just act confused and hope that gets me into the country. I know it’s sort of depressing that an American can stumble into a country, act like he doesn’t understand how borders work, and somehow get in whereas a Syrian can be a physicist or brain surgeon and have to live in a UNICEF tent on the Turkish border. But that seems to be the current state of affairs. Nonetheless this option had some problems. First, it involved everyone who I interacted with at immigration going along. One border guard, coming or going, could lead to a nightmare scenario where I ended up living in the Kokota International Airport like Tom Hanks character from the movie “The Terminal”.

I did have a picture of myself with former president Jerry Rawlings the week before, so I did understand there was a possibility of showing that photo to the immigration officer and smiling and seeing if that got me anywhere.

But then I pictured what would happen if I flew into Houston with no visa and a photo of me with Bill Clinton and decided that was probably a bad plan as well.

So there was the second option: the 48-hour transit visa. Ghana is a country that doesn’t make it’s visa process particularly easy (although the consulate in Houston was awesome and I really was impressed with their professionalism). But there is an easy second option: the transit visa. Although there was almost no information online about the transit visa, I was able to ascertain from a most reputable source (a user comment on Travelocity) that I could in fact obtain a transit visa at the airport when I arrived. However, there seemed to be some dispute as to how much the transit visa cost. I just assumed high and hoped that this would not turn into a travel nightmare. I had already had a full day in Rwanda and a full night of travel from Kigali to Accra. I also had another ridiculously long layover in London (10 hours) coming up and I really wanted to sleep in a bed for a couple hours and get a warm shower.

Arriving in Kokota International Airport I immediately stepped into the “Visa On Arrival” office, where I noticed the prices posted on the window for Transit Visas: $50 USD. It was slightly higher then I was expecting but still in the ballpark. Athough the price were quoted in dollar I decided to pay in Ghanaian Cedis since I was pretty sure I would never be able to get rid of them when I got back to the States. The price went up to GHS 240. Interestingly enough, the service charge for paying in the local currency was about $4 USD. But at this point I wasn’t worried about that. I just wanted to get our of the airport and into my hotel: the Grand Star Hotel in Haatso Bohye, about five miles out of Accra. I booked the room on Hotels.com and at $28 a night the price was right and the photos looked promising. But first I had to get there. Even the seasoned traveler can be overwhelmed by Accra. As soon as you step out of the baggage claim area you are approached by dozens of taxi drivers, hustlers, and helpers all aggressively offering their services. I was under the impression that the hotel would pick me up, but due to a miscommunication, they were not there. Instead I had a taxi driver insist on helping me get to my hotel, much to my chagrin. He eventually called the hotel and they agreed to let him drive me to the hotel and they would pay him, a hefty chunk out of the already inexpensive room rate. I really appreciated it, as I knew that this was already a very inexpensive room and since I already paid for it they could have gone another route and said it was my problem.

Nonetheless, en route the cab driver voiced his displeasure with the hotel. Not because he knew anything about it (he didn’t) but because it was so far out of town. I was once again familiarized with a concept that was alien to Americans: five miles in Africa isn’t the same thing as five miles in America. The journey was somewhat longer than expected, perhaps thirty minutes (although to be honest I wasn’t really paying that much attention). But despite the long journey, by the time I reached the hotel I was certain this was going to be just was the doctor ordered. It was huge, luxurious, and in the middle of BFE. A quiet village with a beautiful hotel dropped in the middle of it. 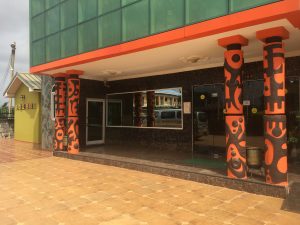 Upon stepping in I was assisted by Fred, and let me just say, I was blown away by this place. Yes, it was mostly empty, but I could tell it was nonetheless a successful hotel. And its success was based entirely on service. Despite it’s out of the way location they more then made up for the inconvenience in getting there by offering five star service for $30.

I had a room on the third floor, and although there was no elevation I couldn’t complain. Fred carried my rather heavy bags up (hey, what can I say, souvenirs are cheap in Africa). I was already tired and could have fallen asleep right there, but there was one last Ghanaian adventure I had to undertake: fufu. I went down to the restaurant and asked if they could prepare some fufu, the one classic Ghanaian dish I had not tried while in Ghana the previous week. They told me they could. While I waited for my food I walked around the pool area and to the second floor of what looked to be either a bar or a guard tower at one time. 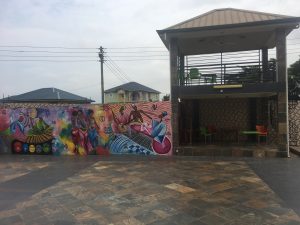 I could see a neighboring primary school with some sort of event going on, and I sat back to listen to a school full of local kids singing away as I soaked in my last day in Africa.

Soon my fufu arrived and I discovered that fufu is best eaten with goat soup. I took a pinch of the fufu to try it and I was quickly won over. This was awesome. Somewhat sweet, somewhat starchy, and delicious; even by itself. With the soup it was even better, and I realized this might go on to be the high water mark of my African cuisine adventure.

Nonetheless the meal was the final tap into my rapidly depleting energon cubes. I headed up to the room and was out before my head hit the pillow. By the time I woke up about four hours later I had a bone crushing headache and a recognition that I needed to head back to the airport. I quickly showered up, changed, and checked out. I asked Fred if I could change $20 so I could give him a tip but he declined. I then got into my cab and headed back to the airport. I arrived with over three hours to spare before my flight. I figured it was plenty of time to get to my gate. Except this was Ghana. The immigration line was a jumbled mess and I finally had to beg a border guard to let me cut in line because I was running out of time. He let me through and I made my gate with about ten minutes to spare before boarding. It was a very African end to my African trip, but even though I ended up spending close to $100 for what amounted to a four hour nap and a bowl of fufu, I didn’t regret it (although this post would have a much different tone in I had in fact missed my flight). In the end, the staff at the Grand Star Hotel and the chance to experience just one more day in Ghana made it worth every penny.